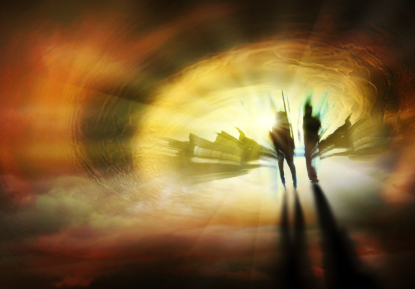 Wow, it sure has been awhile since I wrote an article, but I am back behind the wheel again. Sure I wrote some articles earlier about using undead monster classes and player racial classes, but those are just a bunch of tables and not a huge amount of information.

Don’t get me wrong though. That stuff is very useful for campaigns, but it just lacks that good old story element and excitement that everybody craves. Yes, the time to explore another element of dungeons and dragons has resurfaced by yours truly once again.

I am going to start where I left off discussing the outer planes and move on to being undead in the first place. We see that last time the outer planes based on 3.5 is composed of different areas. That also holds true with 2nd edition and 4th edition believe it or not. I am more of a fan of a second edition setup personally. In fact, that is what I based my last picture on.

Now, I ran a campaign where a player died due to some warlock knights. Wow! That sure was not fun for her. Yes, she was transitioning from 4th edition to 3.5. We did it backwards for editions.

I am sorry but 4th edition just was not working out for us anymore. We just didn’t like that setup and we are entitled to our own opinions and preferences concerning what editions we may or may not like. Some people like 4th edition and others don’t and that my friend is perfectly fine.

Anyway, back to the topic. I apologize if I get sidetracked from time to time.

After her death she ended up becoming a ghost?! Yes, you got it right. I made a monster class based off of the ghost in the monster manual as well as a mix of other manuals too. I will have to hand it to you though. It was quite a pleasing test result as her character was able to survive as a ghost even though her ghost form disipated about three times in the outer planes.

The trick to surviving as a ghost and not dying permanently is to stay in your home realm – at least for a level 1 ghost. She was a Drow, so her home was the Demonweb Pits and of course her deity was Lolth herself.

Well, she mostly died from falling a lot. You are probably asking why because the books say incorporeal creatures are not subject to falling damage. Yes, you are absolutely correct on that one. I, however, implemented a house rule that states ghosts lose their incorporeal abilities in the Outer Planes and regain them when leaving the Outer Planes. That way they have some vulnerability when in the home of the dead.

I of course let her keep the undead abilities as she is a ghost after all and classified as “undead”. Meaning that despite her lacking incorporeal capabilities, she would still have the advantage of never tiring, never being hungry and never thirsty due to undead being treated as having no constitution score.

Regeneration at level 2, at least in my campaign, will grant the ability to regenerate but at the roll of passing a DC check. While in the outer planes in the home realm only, the character will regenerate instantly unless the deity doesn’t want to regenerate them anymore. It is really up to the deity in his or her own realm to determine whether he wants to bring his spirits back to life in spirit form of course.

Out With The Ghost And In With Life

So the real question that is being asked by people that tire of being a ghost or any undead form for that matter, “How do I get out of this cursed hell?” I mean people don’t mind it will most likely not ask that question and embrace it, but for those who tire of the undead life that is a whole other ballgame.

Put it simply the Dungeon Master gave them a second chance and able to continue playing as an undead character out of kindness of heart or because some other player suggested the idea in the first place and now the player is sick of it. Well, to escape this undead torture, that all depends on what type of undead creature you are. I would have to say being a ghost would be one of the easiest solutions, but I would be lying. People know that curing a vampire is easier than bringing a ghost back from the dead.

Well, first off the player’s character has to desire to be brought back to life and the deity has to give permission for the act as well.

Ok so what cleric spells can bring the ghost back to life? Raise dead, reincarnate, resurrection, and true resurrection. There is a big problem with the spells though. A raise dead spell can only bring the person back to life but only for a limited numbers of days depending on the caster’s level. This time limitation which usually does not exceed a week or so also applies to reincarnate.

You could go the reincarnate method as opposed to raise dead, but what if the subject does not wish to be another race or someone he is not?

This whole raising the dead topic brings up another issue and that is level loss and the soul not wanting to return. Characters will most likely lose at least one level or one constitution point minimum – at least that is what the Player’s Handbook states. Yes, that is the rule, but if you are using my monster class that I provided, I would say that is a no – sort of.  Yes, without the monster class, I fully agree with that rule.

With the monster class, I say that since all monster levels are being lost when brought back to life anyway there is no need to lose any levels from the standard class. The character already lost a bunch of monster levels previously and one standard class level was already lost when the character became a monster in the first place. No point in adding double punishment.

I would have to say your best bet would be true resurrection. Yes, resurrection could do the job also but it requires at least a body part at minimum. That could be a problem without a body or even part of one.

True Resurrection can bring someone back to life that has been dead for 10 years or longer. No body is needed at all, just the time he died and where he died have to be mentioned verbally. Just remember this won’t apply if the player died of old age. You might need a deity for that one.

Also ghosts can not come back to life against their will. Well, I originally thought that meant the character states that to the Dungeon Master, “Hey, I like being ghost don’t bring me back to life.” It could be interpreted that way, but it actually means the soul itself and not the mind of the spirit is what is causing the conflict. It is something that is not consciously done on the surface.

The soul will only come back to life from a spell cast by someone who has a similar alignment or worship a deity that has similar deity portfolio of his own deity. It mentions name in the book also, but I don’t think a soul will care unless it is a name of a person that it really doesn’t like. Maybe it disliked someone in the Material Plane before death and recognizes the name. Thus no resurrection or something.

This brings on one more problem. What about true resurrection? That doesn’t have a loss of a level right? Yes, absolutely correct. Without a monster class, you just have no losses for the guy. With a monster class, most likely from Savage Species, you just restore the lost standard class level the character had when he became undead in the first place and remove that undead class level afterwards or beforehand if you wish.

Resurrection of An Old Friend

So let us go back to my rogue character who was killed by Lolth. He was in body form so two results would have happened. He went to his own realm of the dead for his alignment or deity or Lolth caught his spirit and destroyed it instantly.

As much as we love spirit crushing, I am going to go with that he floated to his own home realm or however the dungeon master normally has spirits go to their realms. I like to have spirits go on foot after being sucked through a portal, but that is just me. So after arriving in his realm, he is kind of confused and suffers some memory loss due to the environment.

Yes, spirits gradually forget there lives over a period of time and eventually become one with their deity. That also depends on the deity as well. Some spirits don’t join with the deity and just do battles forever at the amusement of their deity.

Anyway, he wanders around aimlessly with no real goals in mind. Just doing his thing. He only remembers how he died and nothing more. Ya, he kind of is pissed off about suffering in a river of acid. Not a comfortable feeling to remember. Other than that, he is quite content with things.

Then, out of nowhere he is being sucked away back to the material plane by a high priest who a friend of his called upon. The high priest is using true resurrection and is of good alignment and worships the same deity of the realm of the dead he was just in.

He comes to life in his small home town and is able to see his loved ones again. He decides that he has finally had it with adventuring. After remembering dying in a river of acid by Lolth herself and hunting the drow for so long he has learned to not bother with them anymore. He has finally decided that settling down is the best thing for him to do and let someone else handle the drow hunting from now on. He passes the job onto his sister and his friend instead.

Also he gives them a tip as his final words before calling adventuring quits, “One word of advice. Don’t use plate mail armor when going in dungeons. You may also wish to find my broken bow in the Demonweb Pits if you can prove capable of facing Lolth herself. I was not strong enough to face such a powerful deity although I think it must have been a copy of her as I did not die instantly upon looking at her face. I love you guys and wish you best of luck on your future journeys.”

He begins by selling his old plate mail armor and constructing his own little home in the town. Life of adventuring does have its lessons and he has learned it the hard way and passed on his final wisdom.

Well, that wraps up my rogue story I had going on for many posts. If you have any questions or comments, please reply below or let me know on google plus. I can also be reached on facebook and twitter.