The Planes Have Evolved 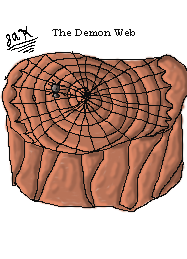 Artist:
Jakob A. Kattner, The Demon Web is the home of the Spider Queen. The spider you see is actually a moving vessel where she
resides in.

As you probably already know the dungeons and dragons universe is pretty much composed of seven planes of existence – not including the demiplanes. Now, this has changed somewhat since my old 2nd edition days. Some planes are the same and some are different. It changes somewhat in the 4th edition as well. The point is the planes are in constant evolution from one edition to the next.

So, what I will be covering is the outer planes. I am sure the ethereal and astral planes would make for a stellar adventure. In fact, I ran a campaign many years ago that did involve those planes. But the focus will be the first one mentioned due my topic covering the abyss.

The abyss has many layers to it and one in particular that people may or may not be a fan of is the 66th layer where lolth lives. It is highly recommended that only high level characters pay it a visit. Is it possible for a low level to survive it and return to home for breakfast? I would have to say yes. Would it be a walk in the park for him? I would have to say absolutely not.

First off, the character would have to find a way into the dang place. Then, he would have to manage to avoid all the demons and devils along the way or whatever horrible creatures that may end up being thrown at him. To top it off, the terrain itself would be just plain utterly dangerous. Now, could withstand the beating from the gravitational changes? Possibly.

Then, you come across the issues of finding the demonweb pits to be extremely lucky due to the vast amount of pits to choose
from when in the Plane of Infinite Portals. I would have to say the best bet for getting there is either with some sort of
magic item that points the way or finding a portal in possibly a drow lair (if you are so lucky to find one) that connect to
lolth’s lair itself. Yes, there is a lot of randomness involved in this procedure.

Now, I do want to point out that it will be really hard for a low level character to get a hold of a magic items or get in contact with someone that knows directly how to get there in a game session. For one, he would lack the money to buy such an item as well as maybe the ability to use the item (depending on his stats as well as any optional rules that may or may not be in place). If he is able to manage to use the item from either stats or possible an awesome class he picked, then well the next issue would be price. I am pretty sure (unless he was lucky enough to come upon an awesome treasure find that was not being guarded for some reason) he will be lacking the funding for it.

So, his alternative will be to do a ton of eavesdropping or follow a ton of drow around for quite some time. Demonbinders would be the most useful. Maybe try to disquise as one of the drow – in hopes that he is not discovered – in order to divulge the information from them somehow or possibly steal an item from them.

Ok, so now that we covered both the possibilities and impossibilities for getting to the outer planes and hopefully surviving it, let us ask the real question here. What item am I going to use to get there already?

Methods of Travel To Outer Planes

If you just so happen to obtain a bag of holding, take it to the floating parlor and destroy it by piercing it while it is inside out. You will be teleported to a random location in the astral planes which thus bring you one step closer to your objective. The Astral plane is actually one of the connections between the outer planes and the material planes where your character most likely resides. The downside to this method is you may not be near an entryway point to the outer planes upon reaching the vast astral region.

If it is items found, chances are it was probably custom made by the dungeon master. I mean I looked in some dnd 3rd edition books, but I had trouble finding actual items (other than the bag of holding mentioned) that are literally spelled out for taking a character to the other planes. I did manage to find stuff relating to going to the shadow planes, but that does not help with the predicament.

An alternative to items, would be to wait for a portal to appear at a certain time of day in a certain region. That is assuming the character is able to discover that information somehow during the game.

Enough talk about the different facets of how to reach the outer planes. I could probably discuss the subject for an eternity. Let us go on to my usual storytelling. This time around there will be no happy ending because it is the abyss after all.

My male human rogue from previous adventures has finally reached level 5 at this point. He has learned how to use the Bow of the Black Archer that he obtained in an orc dungeon several months ago.

Yes, time has passed and he has grown in experience. He put away his foolish ideas of wearing plate mail armor due to taking many beatings in his time. Now was the time for accepting who he is – a rogue – and move on. Instead he currently wears leather armor.

Using his bow’s power called Drowseeker, he is able to sense when the Drow are nearby. He has figured that the good loot must be in a drow region, so off he goes wandering the underdark in search of drow booty. He hears a drow approaching and hides in the shadows. The drow does not spot him. Swew.

He walks quietly down the dark passageway and relights his torch. He just so happens to stumble upon two priests performing a ritual at an alter. He sees some purple doorway open up in thin air.

He turns around and says to the rogue, “Nice try, but your attempts are worthless. Prepare to be slain by something more powerful than even myself. This will not only teach you weaklings a lesson for trespassing our territory, but also will eventually prove the destruction of your species altogether.”

Through the large portal walks a huge demon with a fiery whip. Upon seeing the beast he attempts the rogue attempts to run toward the priest in an attempt to dispel the magic portal (at least that is how he figured it worked). Then suddenly the altar moves and attempts to attack him in the process.

The demon seems to not be in full control of the priests and attempts to attack the lead priest with his fiery whip. Flames burst everywhere and the priest dies. The rogue attempts to roll out of the way, but fails the attempt somewhat and thus gets burned and his almost dead body goes rolling through the portal and lands in some dark passageway.

He stumbles and falls into a hole that seems to twist and turn for an infinity. He has landed into yet another dark passageway, but this one seems to be full of cobwebs that he has managed to feel with his charred hands.

Before reaching his final breath he catches one last glimpse of a beautiful woman with dark skin and a brownish crown with spider symbol in the middle of it on top of her head. He finally has reached heroes end. The woman picks up his bow that seems to be stuck to his right hand and breaks it in half. Then, she dumps his corpse into a river of acid and spits on it.

Low Levels Need To Be Careful

Pretty sad ending. I know, but high level creatures are pretty hard for a low level character to fight without some backup.

I would have to say it is highly not recommended for a low level character to fight character of higher level by himself. Get some assistance. If in a team, make sure you stay together.

If it is low levels vs. other low levels that is a totally different scenario. Splitting up might be acceptable in that situation.

If you have any questions or comments about this post, please leave a reply below in my comments section or send me a message on google plus.